I’ve been walking in Nebraska since July 11 and have gone through countless small towns and cities. This is in rather stark contrast to Nevada where the towns encountered could be counted on one hand. It has been rather nice. Most of the small towns in Nebraska have a city park and a lot of them have campsites with electricity and water. A lot of these are free for the first night or two and just two or three dollars after that. I don’t know how they do it, but it is surely a welcome sight to us! 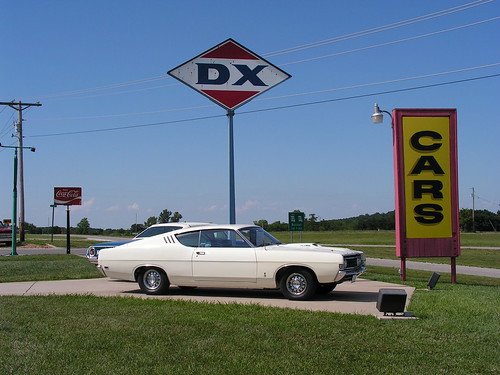 Okay, I’ve had some people guess about the gas station in Kenesaw, NE. Yesterday I mentioned that it isn’t a Pure or Sunoco station. Mikey in Indianapolis got it right and also got it first. He said it was a DX station and he is right. My dad owned a couple of these stations in the early 60’s and I instantly recognized the sign even though it had no inside. Also, just a few minutes ago, I got a comment from Brent P. of Kenesaw who owns the restaurant and bar across from the station. He too guessed DX. Sorry Brent, but you

were a few hours behind Mikey. Mikey, you win the first prize: a NO expenses paid trip to Kenesaw, NE where you can see and take a picture of the station yourself, and if you can catch him you could probably have an ear of corn with Lloyd S. And, you will need to stop in and see Brent and rub it in a little. Maybe he’ll buy you a drink. Brent, you get the second prize: you get to entertain Mikey when he comes to town. Thanks guys for your comments. It was fun for me.

to help Valda & me buy gasoline. It was unexpected but certainly much appreciated. Butch, we may not be related anymore, but you will always be family to Valda & me. Thanks again. Thanks also to Olivia E. and All Cooped Up for their recent donations to Gateway. They both are much appreciated!

I’m currently in Crete and should be in Iowa on Monday or Tuesday. I plan to take Saturday off and hopefully we’ll be in Nebraska City by then. The pictures is of Valda listening to the corn grow,.