This was indeed a weird day. Nothing out of the ordinary happened to us, but we went into the little town of Maybell, CO and it was as if we went into The Twilight Zone. Now Maybell has maybe a hundred people living in and around it. It is so small that it isn’t even on the list of towns for Colorado in the atlas. But they do have a nice little park in the center of town and we checked it out yesterday and found we could service our RV there. So, I walked into the town center and Valda had gone ahead and entered the park and was waiting on me. She was parked next to Dave’s Road Kill Cafe, an enterprising little joint in the back of a trailer. Now, I’m not sure what kind of dining fare Dave has, but he offered us an elk steak sandwich “fresh off the grill” – yeah, probably off the grill of a Mack truck.🦄  🚚 🍔  We politely declined, saying it was much too early for our lunch. 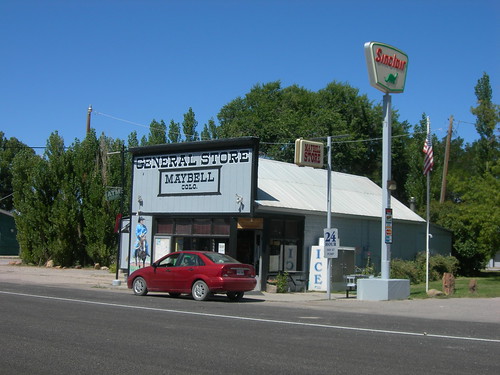 Now, that isn’t the half of it. There was a dog show going on in this park. There were about twenty RV’s of different sizes and price tags parked in every conceivable spot. All the owners and spouses were out on the acre size lawn with their dogs going through their routines. There were tunnels, ramps, fences to jump and posts to run around for these dogs. It was quite an event. Someone said there were people there from all over the country and Canada too. Who would have believed it – an international dog show in Maybell, CO. Now this town has only one restaurant (besides Dave’s mobile one) and it is closed. The Sinclair gas station sells cold sub sandwiches and candy bars and coffee (something Dave didn’t have). So, Valda & I can’t quite understand why there is a dog show going on in this town where the only people watching it are the participants, their dogs, a judge or two, Dave, Valda & me.

Oh well, the people seemed to be having a good time, and the dogs sure did seem to enjoy what they were doing. The last time I saw Dave, he wasn’t looking at the dogs, he was inspecting the front end of his truck. 😜

We are in Craig on my version of a weekend. I am taking Saturday off and will resume walking on Sunday. Utah stats should be posted tomorrow.

Personal to Mark K, Dan M, and Laresa B. Thank you all for your recent contributions to Gateway For Cancer Research. It is much appreciated! And a thank you to Nic and Jude for informing me about the pictures of the animals. I should have known Nic would know what they were. We can’t wait to see you too.